We will need the following tools to complete the project:

Setting up the circuit

A simple LED circuit consists of a LED and resistor. The resistor is used to limit the current that is being drawn and is called a current limiting resistor. Without the resistor the LED would run at too high of a voltage, resulting in too much current being drawn which in turn would instantly burn the LED, and likely also the GPIO port on the Raspberry Pi.

We can then calculate the resistor size needed to limit the current to the LED’s maximum forward current (IF) using ohm’s law like this:

Important information: Since ohm’s law tells us that I (current) = V (voltage) / R (ohm) rounding up the resistor value will lower the actual current being drawn a little. This is good because we don’t want to run our system at the maximum current rating. Rounding down instead of up would be dangerous, since it will actually increase the current being drawn. Increased current would result in running our system over the maximum rating and potentially destroying or damaging our components.

With the value calculated for the current limiting resistor we can now hook the LED and resistor up to GPIO pin 8 on the Raspberry Pi. The resistor and LED needs to be in series like the diagram below. To find the right resistor use the resistor color code – for a 100 ohm resistor it needs to be brown-black-brown. You can use your multimeter to double check the resistor value. 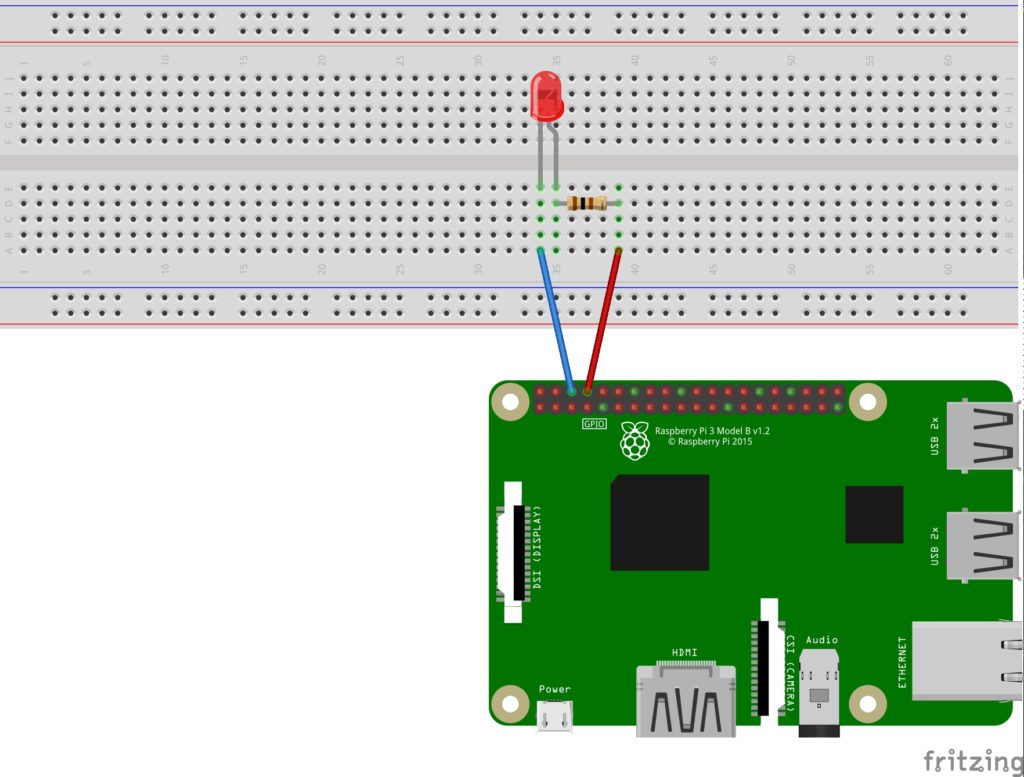 When hooking up the circuit note the polarity of the LED. You will notice that the LED has a long and short lead. The long lead is the positive side also called the anode, the short lead is the negative side called the cathode. The long should be connected to the resistor and the short lead should be connected to ground via the blue jumper wire and pin 6 on the Raspberry Pi as shown on the diagram.

To find the pin number refer to this diagram showing the physical pin numbers on the Raspberry Pi.

Writing the Python Software to blink the LED

With the circuit created we need to write the Python script to blink the LED. Before we start writing the software we first need to install the Raspberry Pi GPIO Python module. This is a library that allows us to access the GPIO port directly from Python.

Our script needs to do the following:

To initialize the GPIO ports on the Raspberry Pi we need to first import the Python library, the initialize the library and setup pin 8 as an output pin.

Next we need to turn the LED on and off in 1 second intervals by setting the output pin to either high (on) or low (off). We do this inside a infinite loop so our program keep executing until we manually stop it.

Combining the initialization and the blink code should give you the following full Python program:

With our program finished, save it as blinking_led.py and run it either inside your IDE or in the console with:

With the program running you should see something like this:

You’ll notice the program keeps on running because of the infinite loop. To stop it click either stop in your IDE or Ctrl+C if you run it inside the console.

Is the LED not blinking? If the LED diode is not blinking try turning it around, maybe you got the polarity wrong (this is perfectly safe).

Categories: ElectronicsProgrammingRaspberry Pi
Some of the links in this post are affiliate links. This means if you click on the link and purchase the item, I will receive an affiliate commission at no extra cost to you. All opinions remain my own.